This is a bit of a worry.

A picture clipped from a newspaper article about the problematic nature of some nudie, well intentioned fundraising calendars. 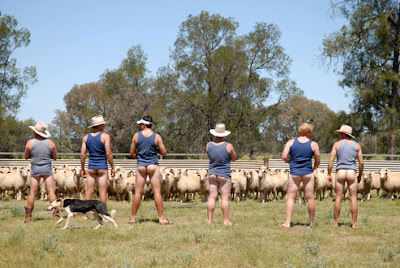 Being too revealing - or challenging comfortable gender stereotypes - seemed to put people offside, Dr Turton-Turner said. "I'm not telling people what they should or shouldn't do. I'm trying to highlight what's going on beyond the surface layer - that the calendars are not as innocent as they seem," she said.
http://www.dailytelegraph.com.au/news/gallery-0-1111120166843

Comments:
Second bloke in from the right has a worrisome hand positioning. I have never found sheep to be exciting.

sheep actually die after human humping. just sayin.
Smart dog is getting right out of there.

Should be t'other way round. Just sayin' too.

I am hearing that Kiwi Song.
"Loving Ewe - Loving Ewe".


The summer of 1936 wasn't as fun as the one I had spent in my
beloved Charlham, but I did take time to enter the flower show. My
contribution was a collection of different grass stems, which even I thought was a remarkable showpiece among many mundane floral
exhibits. This attracted the church ladies and a princely sum of two shillings and six pence for first, second, and third prizes. (It was a singular exhibit)
The exhibit was displayed in All Saints Church (or was it Holy
Trinity?) for the Harvest Festival Floral Display, where mostly yokels
sang .All good gifts around us are sent from heaven above etc. A bier
for transporting coffins was kept inside the entrance of the church. The interior of the large church had a peculiar smell. Its high wooden rafters were in a terrible state because deathwatch beetles were eating the wood.
As a child, I wondered if these creatures were emerging from the bodies in the graveyard.
The two shillings and sixpence that I won (about twenty-five cents)were begrudgingly shared with my foster brother, who was a right blockhead. Another three pennies were invested in the guess the weight of the pig. competition on the advice of Gerald Green, my foster parent. His local nickname was Ram, which I used only once. I wondered what dark secret Ram was hiding. I believe the answer came to me during my first career while listening to sailors. stories about lonely sheep farmers,
particularly those in New Zealand. Their peculiar romantic liaisons with their woolly charges had me thinking that Ram may have had intimate contact with the woolly maidens he was entrusted to shear.

Now those are asses.